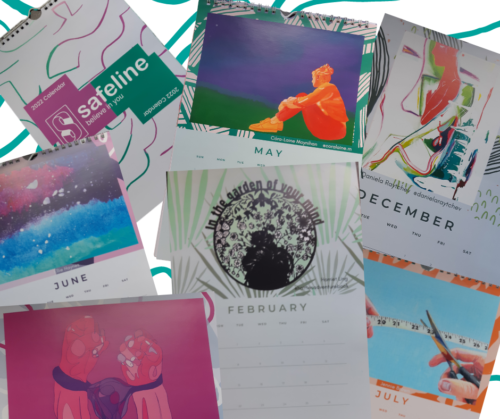 Safeline ambassadors Cora-Laine Moynihan, and Ally Zlatar are raising funds for Safeline through selling calendars they created with the help of 8 other artists.

Meeting through the Diana Award as award recipients, Cora-Laine and Ally embarked on a project to creatively raise awareness of Safeline and tackle the stigma of discussing abuse and mental illness.

Having previously received support from Safeline, Cora-Laine has spent the past 7 years representing the charity and raising awareness of sexual abuse and poor mental health – resulting in her winning the 2019 Diana Legacy Award.

As to why she continues to support the charity, Cora-Laine stated “Safeline is a hidden gem in the heart of Warwick. It is a service that not only cares for those it supports but one that also wants to help survivors rediscover their own identities and heal. Safeline is a safe place for anybody and everybody, no matter age, gender, race, or sexuality. That is what I love about the charity and what I want to preserve.”

Providing a wide variety of support, Safeline often uses creative measures to aid survivors including drama and art therapy as well as performance and sport projects for young people. Both Cora-Laine and Ally stem from creative backgrounds, with the former studying BA English with Creative Writing at the University of Nottingham and the latter studying a PhD Doctoral of Creative Arts at University of Southern Queensland. Combining their studies with the artistic nature of some of Safeline’s services, the two co-ordinated their charity calendar with the help of University of Nottingham Art Society members – including the society President, Jennie Brown – and Warwickshire-local artists.

Ally described the process of creating the calendars. “For Cora and me,  we really want to focus on using the artistic voice as a way for creating and inspiring change. We reached out to a bunch of talented artists within the UK who are sharing their stories through art on the themes of recovery, hope and resilience. We were so excited and eager to showcase the tremendous talent we found after seeing the diversity of work we received. Our idea was to create a digital exhibition alongside a calendar so people can access it virtually with ease but also have a piece of the art and exhibition to take home with them and be able to use on a daily basis. What we hope people take away from both exhibition and the calendar is that the artistic voice can contribute so much to our understanding of mental health and specifically recovering from sexual abuse.”

Each month in the calendar presents an exclusive artwork demonstrating the artist’s personal interpretation and experiences with recovery from abuse and/or mental health. One such piece was created by London-based Contemporary Artist Daniela Raytchev, another Safeline Ambassador.

To buy a calendar and support Safeline, go to Safeline’s online store