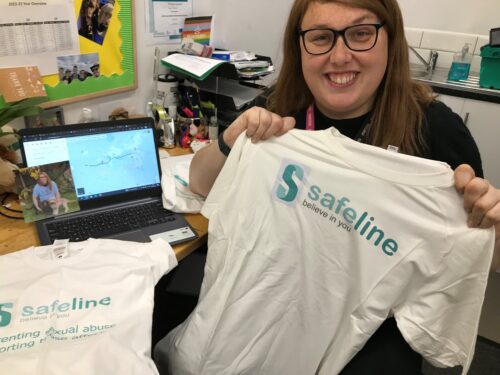 On Friday 25th February 2022, Alex Pearson, Community Champion from Morrisons in Royal Leamington Spa set out to walk the 15 miles from the Morrisons store to Safeline’s Stratford-Upon-Avon Clinical Offices at Foundation House.

Alex was supported in her walk by a “Magnificence of Mayors” better known as the “Chain Gang”.   Together, Alex, The Mayor of Royal Leamington Spa, Councillor Susan Rasmussen and her consort and the Deputy Mayor of Royal Leamington Spa walked to Warwick where they were joined by  the Mayor of Warwick, Cllr Richard Edgington before walking onto Stratford to be met by   the Mayor of Stratford-Upon-Avon, Cllr Kevin Taylor and his consort Pauline Grant-Taylor.  And of course supported by her two dogs Chester and Archie.

We are so grateful to Alex (and Chester and Archie) for their support.  This is what  #community means. Thanks to Alex and her awareness raising and fundraising, businesses, bystanders and the public were made aware of Safeline and the impact of sexual violence on victims-survivors and their friends and families.  Definitely #NeverMoreNeeded.